From One Night to Wife

Published: 30 August 2015
September is just around the corner and with it the release of my next book, From One Night to Wife. 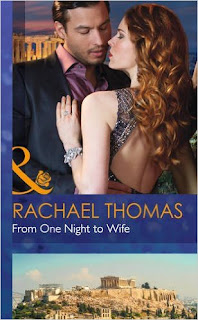 Nikos and Serena meet while she is on the island of Santorini and have a passionate holiday affair, but on her return to England, it becomes clear that their affair has consequences!

‘It’s my baby too, Serena.’ Fury thundered in his veins, pulsing around him so fast he couldn’t think straight. It was obvious she’d done her homework. She knew who he was. But was she really capable of seducing him, hoping to become pregnant with a baby for her sister? If he was thinking rationally he’d say no, but with such a revelation knocking him sideways he’d believe anything right now.

As she stood there, glaring angrily at him, challenging him on every level, he knew he had to be there for his baby as it grew up. He wanted to give it all he’d never had. But it didn’t matter how much money he had, he didn’t know if he could do the one thing a father should. Love his child—or anyone.
How could he when he’d never known the love of his parents? And he’d always kept his distance from his grandparents, shunned their love, preferring to stay safe behind his defences even as a young boy. But he had a bond with them. Could he at least bond with his child?
Was he heartless? Was that why his mother had turned her back on him? Why his father had barely looked at him? Was it his fault?
‘I will be there for my child.’ He watched her for a hint of guilt, any trace of her deceit.
‘What’s that supposed to mean?’
The fury in her voice overflowed, confirming his suspicions.
‘Drop the innocent act. You know who I am. For a woman with your journalist’s training it must have been all too easy to discover more about the father or your child.’ Venom spiked every word as he looked at her, suddenly becoming aware of the waves creeping closer to them. How long had they been discussing this? Hours? Seconds? He didn’t know. Only that it would change things and change him for ever.
‘I have only just looked you up on the internet—in the departure lounge at the airport, to be exact. Because, stupidly, I believed you were an island fisherman, living a simple life. There shouldn’t have been anything more to know.’ Her furious words were flung at him and her eyes sparked like fireworks. ‘You lied to me, used me.’
So the flame-haired temptress had a temper! 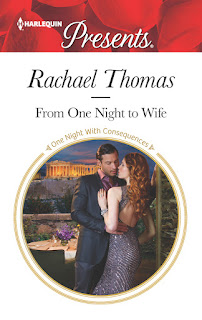 I really enjoyed writing this story, exploring Santorini and Athens as well as the emotions such consequences evoked in Nikos and Serena. I hope you too, will enjoy reading it.

Order your UK copy here and your NA copy here.